Working together for a stronger future.

It was a cold, cloudy, and somewhat drizzly day in the morning, but when we got to the park the sun had come out and it warmed right up…the lineup was huge the whole lunch hour, and once it started rolling guests were each getting our newest coupons and literally getting burgers hot off the grill!!! Can’t beat that!!

We successfully and without a single burger down (ok, maybe I dropped one). Served over 800 burgers to support the united way and spread the Harvey’s name in a very busy downtown park.

This wouldn’t have been possible without the support from all our Edmonton Harveys Franchisees. Thank you all for your time and the donated food.

In what it is calling its biggest change ever, Canadian burger chain Harvey’s is embracing the trend to greater customer customization. Similar to the Subway or Chipotle model, customers will be able to choose from an expanded number of toppings, held in a refrigerated counter, which will be added by a crew member.

Ten new topping choices have been added, including jalapeňo slices, cucumber slices and tzatziki sauce. These join other produce options such as lettuce and onion and an array of sauces, including a new house “Harve Sauce.”

“Harvey’s is the home of the burger truly made the way you want it. Picking out your favorite toppings and having the burger built right in front of you,” Director of Marketing Ally Tosello for the nearly 300-store chain said in a release.

That time when Harvey’s hamburgers came to Toronto 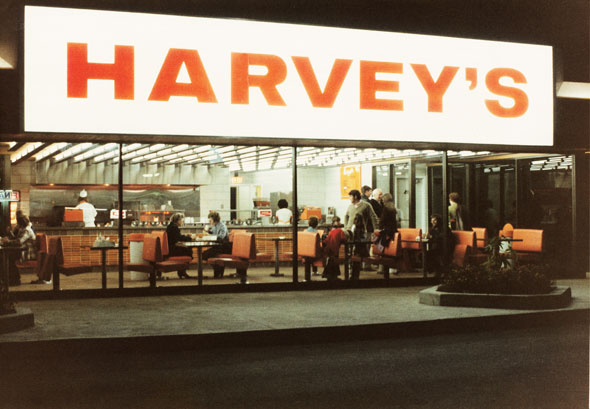 When Richard Mauran opened his first burger restaurant in 1959, he figured he would call it Humphrey’s. Henry’s Hamburgers was already a successful chain in the U.S. with more than 200 franchise locations across the country and Mauran hoped to find a name that embodied the same down-home friendliness.

Flipping through the classified section of the Toronto Telegram, he found what he was looking for: John Harvey Motors at 2300 Danforth Ave–also known as Harvey’s. The dealership on the southeast corner of the intersection with Patricia Dr. was closing to make way for a gas station, and the sign was up for grabs. 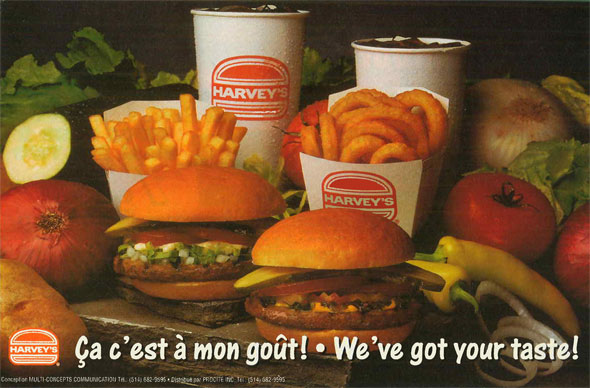 Mauran installed dealership logo on the outside of his first store at the southeast corner of Yonge and Observatory Lane near Richmond Hill. The drive-through was expected to be a seasonal operation, former business associate Bernie Syron recalled to the National Post. However, demand in those pre-McDonalds days soon dictated that the store would remain open year-round.

Syron said Mauran’s burger chain was the first to flame-grill burgers to order and allow customers to add as many toppings–lettuce, pickles, tomatoes, cheeses, and sauces–as they liked, free of charge. 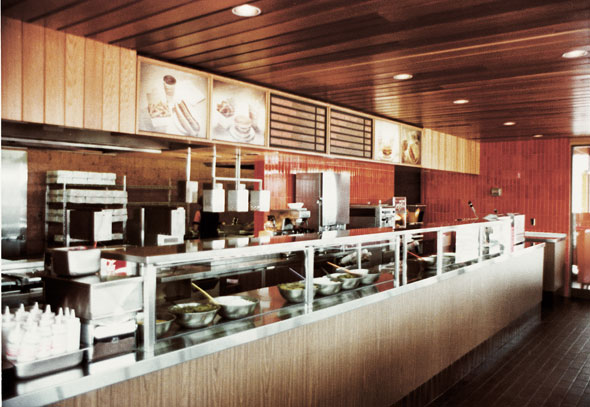 The first Harvey’s franchise location opened at Bloor and Bedford in 1963, within walking distance the newly-completed terminus of the University subway and Varsity Stadium. It was also a short walk from the first Swiss Chalet location.

In 1954, before he began to dabble in burgers, Mauran co-founded “Swiss Chalet Bar-B-Q,” also at Bloor and Bedford. The company exported the popular Quebec dish of charcoal broiled chicken, dipping sauce, and fries to Ontario to great acclaim, though there was soon stiff competition from Church’s Fried Chicken, The Original Chalet, St. Hubert, and KFC. 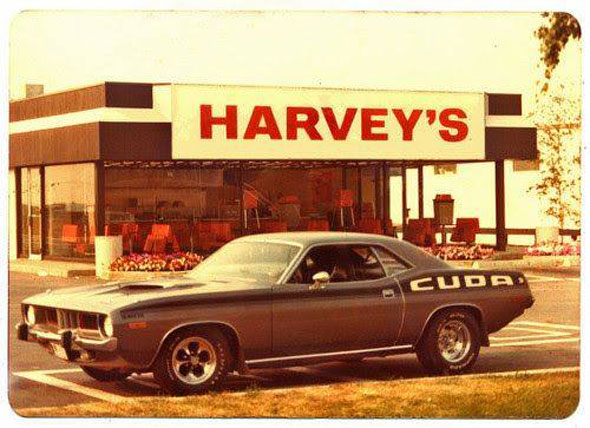 Harvey’s continued to grow under Mauran’s ownership, expanding to include 75 stores across the country by 1977. That year, the burger chain and Swiss Chalet BBQ were merged into a single umbrella company, Foodcorp, and sold to Cara Operations Ltd.–a Toronto-based food giant that operated 50 Steak N’ Burger locations and owned a 50 percent share in the Keg N’ Cleaver, now simply “The Keg.”

At the time of the sale, the average Harvey’s generated about $350,000 a year in sales. The Swiss Chalets took about a million each.

With Cara at the helm, Harvey’s continued to expand within Canada while retaining many of the core concepts introduced under Mauran. Fries were cut from unpeeled Prince Edward Island potatoes, leaving little traces of skin at each end. The patties were cooked to order–“not preheated and waiting for you in a box,” and the toppings selected by the customer.

Mauran went on to found one of Canada’s mutual fund management companies but today is something of a wealthy recluse. “When you attempt to find any information pertaining to Mauran on the Internet or in newspapers, the trail becomes cold,” author Danny Gallagher wrote in the National Post.

“He has never been substantially profiled in any media. Canadian Press has no photo of him. He wouldn’t return calls left at his various residences. Attempts to contact him through intermediaries all went for nought.”

As far as can be told, the father of two of Canada’s most famous fast food brands, now in his late 70s, is living in luxury with homes in England, Monaco, and Fort Lauderdale. He owns a fleet of yachts, too.

Today, there are 14 Harvey’s in Toronto, 265 nationwide. The company employs more than 7,000 people.

Sadly, the first Harvey’s at Yonge and Observator Ln. was unceremoniously demolished in March 2012 to make way for a condo development. No local residents spoke up in its defence.

“It was a fast-food restaurant, after all, not a birthplace of Confederation,” the National Post wrote. 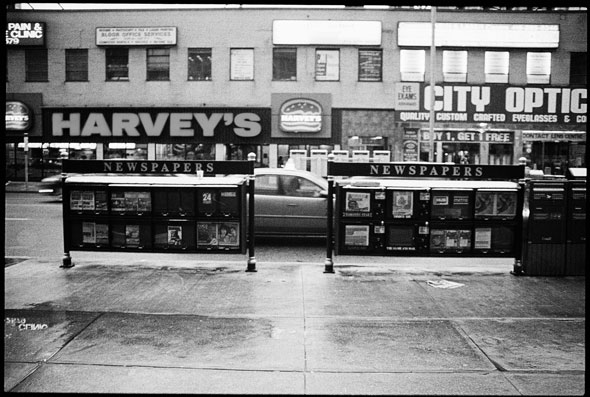 “This information is confidential and may only be used by the HFA and its members.  To maintain the integrity of the association, this information may not be shared and remains the property of the HFA”.